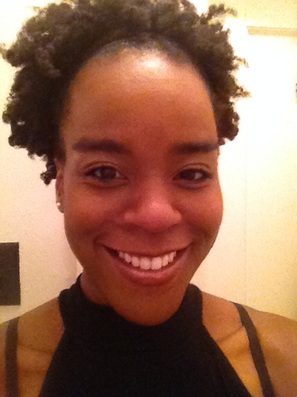 I came across Philana Omorotionmwan’s work while looking for more work by women playwrights. As you can tell from her energetic photo, Philana is a dynamic, hard-working  incredible voice in American Theatre! Her plays have been featured in spaces all across the country and she is currently an MFA student at Ohio University. Check out her interview below!
What is your identity? How does that identity play into your work?
My mom’s a Louisianian Creole and my dad’s Nigerian. (Sometimes I like to think of myself of the kid that Beneatha Younger and Joseph Asagai would have had…) Growing up in Louisiana in the 90s, that made it difficult for me to feel like I had a place where I fit. To black kids, I was African and to Africans… well, I didn’t know any Africans other than my father. That’s probably why I often write about outsiders, people who don’t quite fit in the worlds in which they find themselves. But ultimately, I identify as a black woman. So a lot of my work is about black women fractured by the oppression of race and gender and trying to remain whole.
When did you know that you were a writer?
I always enjoyed writing poems and stories as a kid, but I don’t know if I ever “knew” I was a writer. I grew up wanting to become an actress. However, in my senior year of high school, I had to face the reality that I wasn’t very good. Nevertheless, in my freshman year of college, I took a seminar on Contemporary African American Drama, in which I read Suzan-Lori Parks and Lynn Nottage and Dael Orlandersmith for the first time. It was then that I realized someone had to write the plays actors performed in. And that there were black women writers who wrote them. And I decided that I wanted to be one of them.
You went from teaching to writing.  How did that color your world as a playwright?
I made my first forays into teaching and writing around the same time, which was during college. Therefore, it’s a little hard for me to answer this question. The people I’ve met as a result of teaching (both kids and adults) certainly provide great source material. I’m currently writing a “dramedy” type television pilot about teachers and students dealing with the newly hired, inept CEO of a failing public charter school. This summer, I’ll begin working on my thesis play A Sway Too Free. It’s about four girls trying to figure out what happened after their classmate is arrested and goes missing from her jail cell. Some of the characters will definitely be inspired by the girls I met in my classrooms. Teaching was also how I finally came into feeling that I belonged in the black community, so that sense of community is something I want to capture in my writing.

Tell us about your play Before Evening Comes.
Before Evening Comes imagines a future in which black boys are forced by the government to have their right legs amputated once they turn thirteen. Unless they become athletes, soldiers, or dancers. It’s a simple play in which scenes repeat themselves as a mother attempts to negotiate with the “butcher man” (a social worker) to save her sons from amputation. The play is very much an indictment of the state sanctioned destruction of black bodies. However, the current advocacy of respectability politics begs a question the world of the play raises: how far will we as black people bow down to the dominant culture in order to simply preserve our lives?

What has been a challenge that you have overcome in your career?
I’m still in the early stages of my career, so I can’t say I’ve reached any major hurdles just yet.

What advice would you give to young people of color who are wanting to write plays?
Hmmm… It would be the same advice I give to myself regularly. Get out of your head, go with your gut, and just write. Don’t let anyone tell you what a play is or isn’t.
Where can we find out about your work?
You can find out more about my work at philanaplays.weebly.com. You can also follow me on Twitter @playphiphiplay.
Pa’lante
#Teatrolatinegro